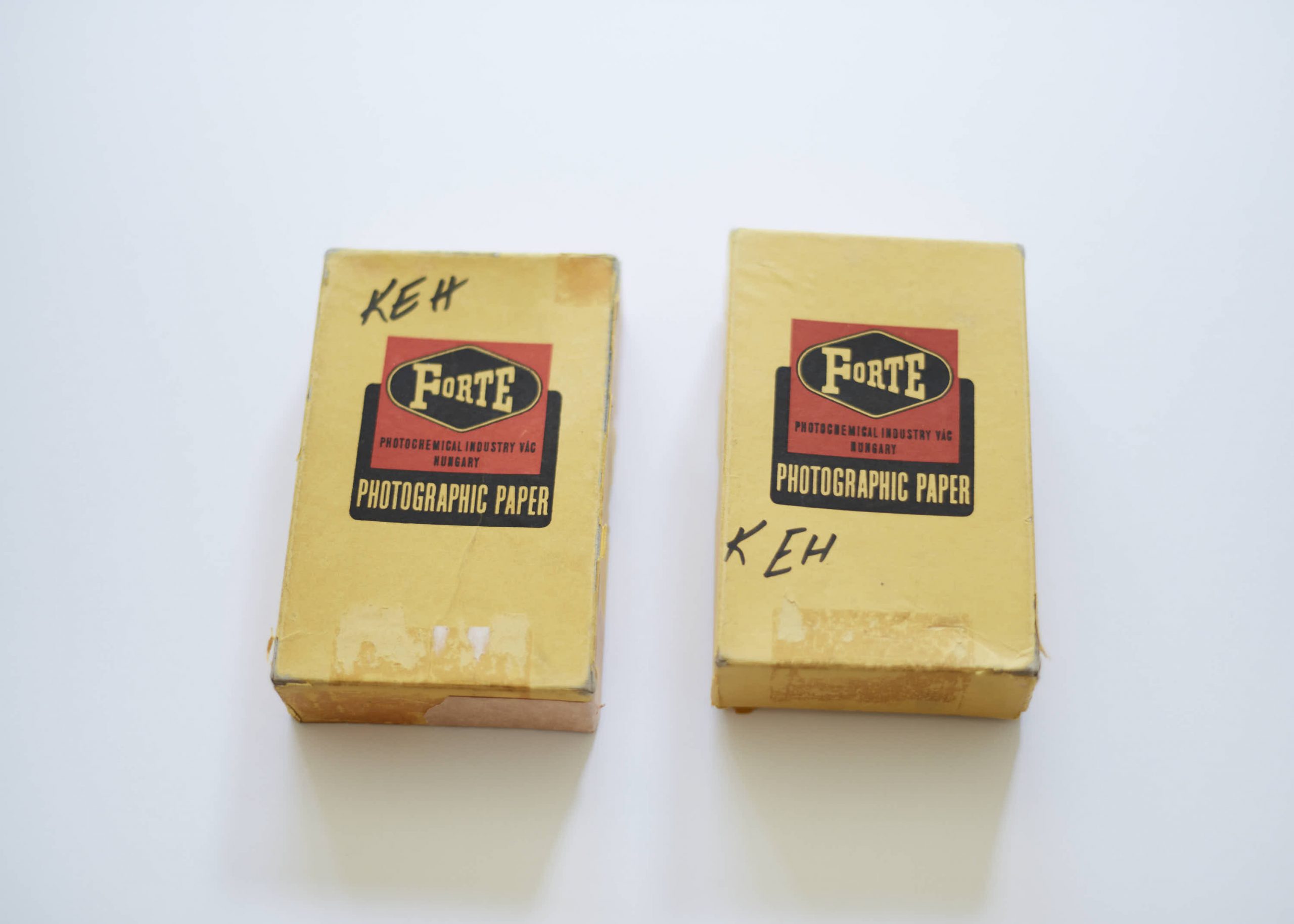 Stocking up in Eastern Europe

I don’t remember buying them apart from it was the fall of 1991. Two boxes of Forte brand Hungarian photo paper.  3 ½ x 5 ½ inches. 100 sheets per box. Maybe it was the small, brick-like shapes that attracted me, or maybe it was the price. One advantage to being a photo student in Austria, near the former eastern bloc, just a couple years after the fall of the Iron Curtain was dirt-cheap film and paper. Brands like Foma, Forte, and Fortezo from Hungary and the then Czechoslovakia. The 120 film still came in aluminum canisters, as if plastics had yet to make it to the east. All at prices that made one ignore the cold war era expiration dates.

They were interesting products, too, like Fortezo, a paper that had a subtle green warmth to it, and a soft matte surface with just a little hardness, making it great to draw on, as I’d come to discover, also there was Dokument, a thin, delicate paper, lighter than normal copy paper, with a lovely tonal range, almost like Agfa’s Ezo, and then there were these two boxes of Forte which, honestly, I may have just bought because I’m a sucker for a good box. The most noticeable thing about this paper was its luster finish with a fine-grained silk-like texture to it. Something I hadn’t seen before or since and would never have used it for a final print of my own, but it worked for the purpose of being handled and flipped through endlessly, plus they felt good in the hand and they didn’t get mucked up with fingerprints and such. Turns out it was perfect for quickly making small work prints. 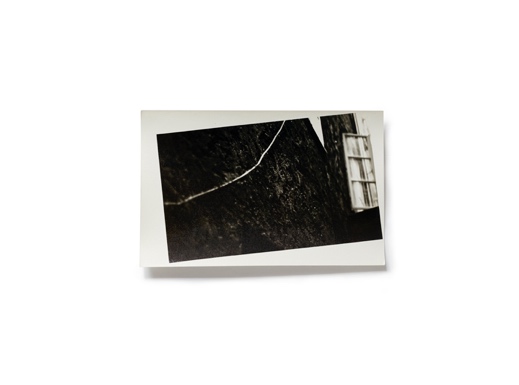 It was my junior year of college that I was spending abroad in Salzburg, at this odd little school on the grounds where the movie “The Sound of Music” was filmed. Think back to the lake they swam in and the Von Trapp estate. There was very little academic structure with respect to the photo program, but in the middle of each semester we were given a two-week Independent Study break and a six-week winter break in between semesters.  Salzburg is centrally located, and most of Europe is just an overnight train ride away. I had a few cans with 100 feet of film in each of them that I’d roll into my own re-useable canisters to save money. I spent my days walking, riding trains, and shooting in places like Berlin, Vienna, Prague, Budapest, Glasgow, Paris, and Gdansk.

I used this small paper as a way to quickly get images off the contact sheet and into my hands. I could make the prints quickly and efficiently in the groin-vaulted darkroom of the Maierhof, the building where our college was located, that was originally built as the stables for the palace next door. I didn’t think too much about what made the cut to print. The ease of production set the bar low. Soon I had a tidy stack of prints that I’d keep in my pocket, then, as the stack grew, I’d use one of the newly emptied boxes to store them. This was great while travelling. Not only could I easily flip through, edit, and pore over them during the hours of rail time, but whenever I met someone and told them I’m studying photography is Salzburg, after which they’d invariably ask what sort of pictures I took, I’d pull out the little yellow box and show them. How profoundly useful it was to have both my portfolio and my journal in the same yellow, hand-sized box of prints.

After my year in Salzburg, I returned to the University of Oregon, to finish my studies. I spent most of my final year trying to understand and refine what I shot the previous year. I don’t remember what I shot my senior year, if I shot anything at all. My head and my heart were still back in Europe, and I still had these (now two) boxes of little prints that needed to get out. They eventually did come out, in perhaps their best incarnation, a book entitled, “Sitting, Standing, Walking,” which most accurately described the method of their creation. 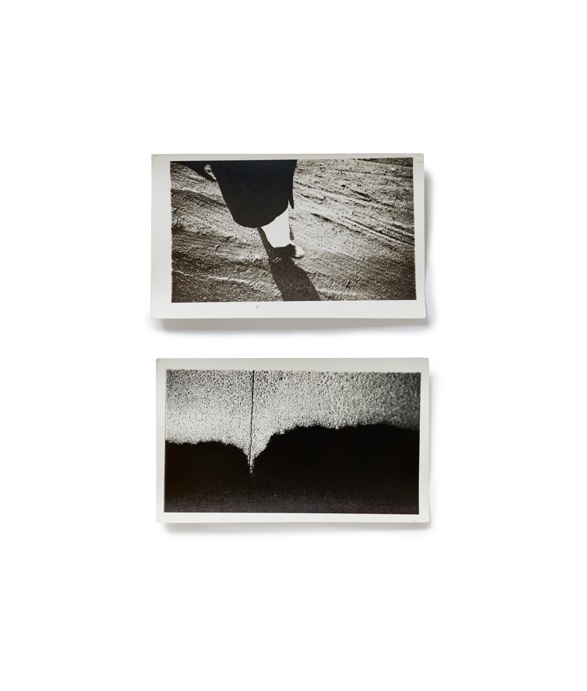 And still now today, almost thirty years later, they still hold their power over me. Though now, I no longer have a darkroom, but rather a film scanner and a 44” printer and am in the early stages of another round. While I could easily make new, tasty 400dpi scans of the negatives, work on the files and make nice big prints, I’m inclined instead to focus on these delicate little prints and try to replicate them in a larger format. When I think of my most successful work over the years, the best stuff is never thought through (or about) very much beforehand.

Now I’m aware that I have yet to talk about any of the actual images contained in these two yellow boxes. I was planning on not showing any of the prints, but my Editor, Mr Sigg, gently suggested that I actually include some images. Something about how a photo blog kind of has to have some photos in it. I caved. But I haven’t told you the where, the film, the camera, the lens, the situation, the anything. That’s because you have your own work to do. You don’t want to be me any more than I want to be you. Telling you how I made my pictures won’t help you make yours, at least I don’t think so. Not that it’s any secret, it’s just not relevant, much less interesting.

One thing I’ve learned both from these small prints and from working as a Fine Art printer with photographers and artists as my clients, is the relationship (or difference) between working with an image and just working an image. I think photographers are more successful when they spend more time making and capturing images relative to time spent working on images. It’s not an either/or, but more of a ratio (maybe 7:1). I deal with some photographers who obsess to near ulcer-producing levels over details that no one else (and sometimes even they themselves) can see, much less care about. Yes, I know YOU can easily see the difference when you flip that group of layers on and off, but by the time it’s printed, and framed, and on a wall, and under the lights – nope, just not there. Or rather, it’s either there or it isn’t there, in terms of the power of the image, but that last either/or was really determined back when you hit the shutter. My point is: spend your finite precious time capturing and making images. Do the work. Shoot, edit, shoot. The good stuff will be there and remain. No amount of post-production will improve a weak image compared to a great image you took basically falling out of bed. Figure out whatever that is and do more of it.

I know this because of what’s in those boxes. Before I became who I am now, I was becoming that person without thinking of it; by just walking and seeing and shooting.