The camera, the negative, the print

My thoughts on film photography

I hope it is clear by now by the discussion on tools that I view film photography as a tool. A tool that can be chosen by photographers if they are so inclined.

A photography tool should be easy to use and help the photographer realize her artistic vision. I wanted to go one step further and discuss some thoughts on film photography from my perspective.  And why I love this tool and use it primarily these days.

For a more “to the point” piece about why street photographwe Jason D. Little chooses film, read his post here (with some fantastic images). 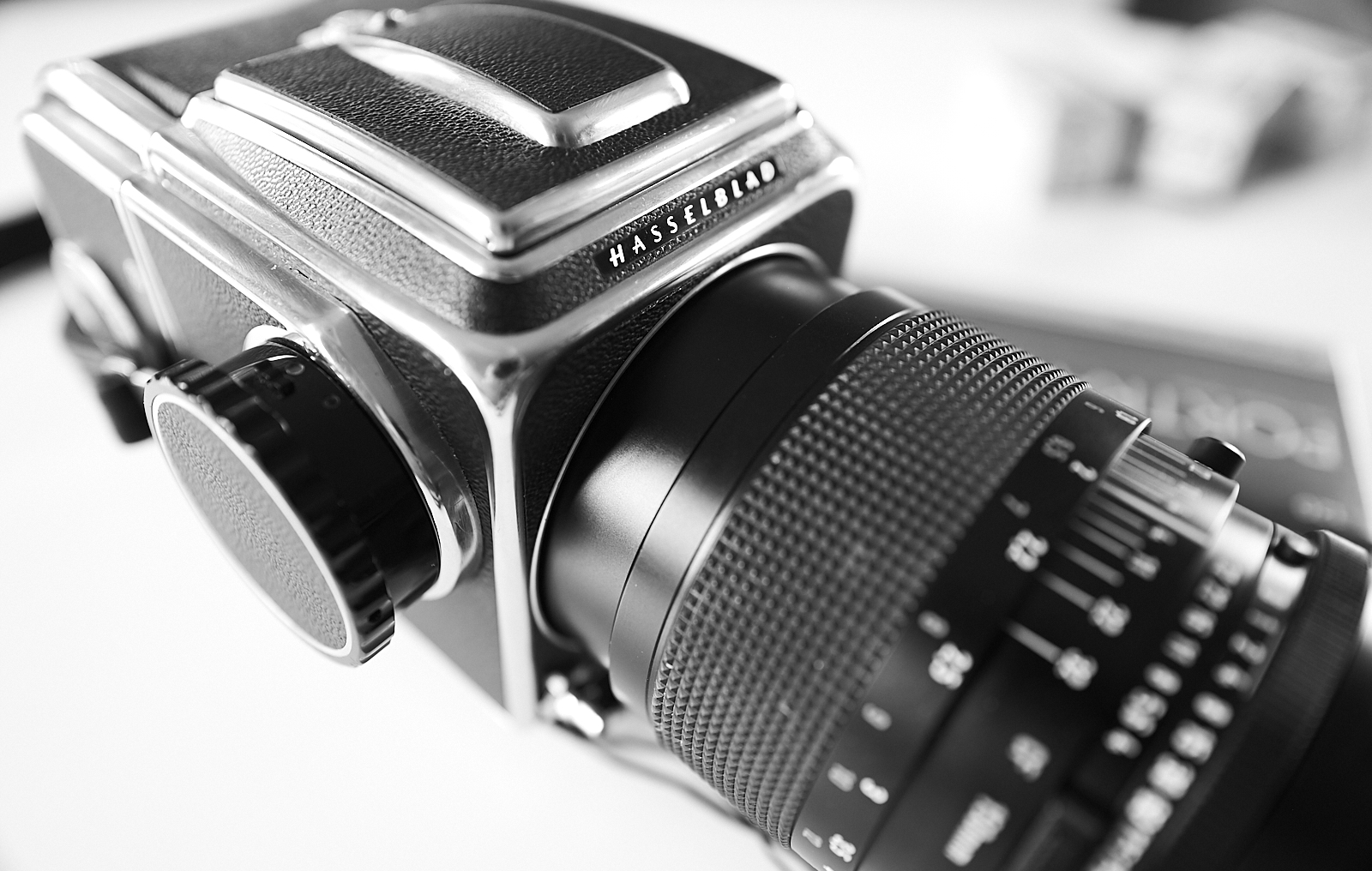 I simply love the analog experience. This includes loading film (in my case 35mm and 120 medium format cassettes), manually operating the camera and lens, and handling the film negatives afterwards for development. Analog experience also means that film photographers have to (often) deal with vintage equipment. Even high quality Hasselblad or Leica cameras need regular maintenance (jargon for this is CLA (cleaning, lubrication and adjustment)). Some of the cameras I use do not need a battery and operate fully manually.

With the analog experience of manual film cameras in particular, the photographer can learn a lot about how cameras work. She can focus on the essence of exposure (shutter speed, aperture, ISO), image rendering (lens, depth of field, film stocks, film format), and thus really focus on story/subject, composition and lighting.  In other words, many of the film cameras reduce the operational control to the essence of photography, and eliminate all the additional options modern digital camera provide in their menus.

I have been interested in minimalism for a while now. And while film photography does involve a process that can be quite involved, the cameras themselves are or can be very simple (and minimalistic). The cameras I love the most have basically 3 dials: 1 to set shutter speed, 1 to set aperture and one to focus. And then there is the film advance and shutter release. Yes, it could get one step simpler by using a polaroid or point and shoot camera, but this is simple enough for me, while still giving me sufficient creative control. 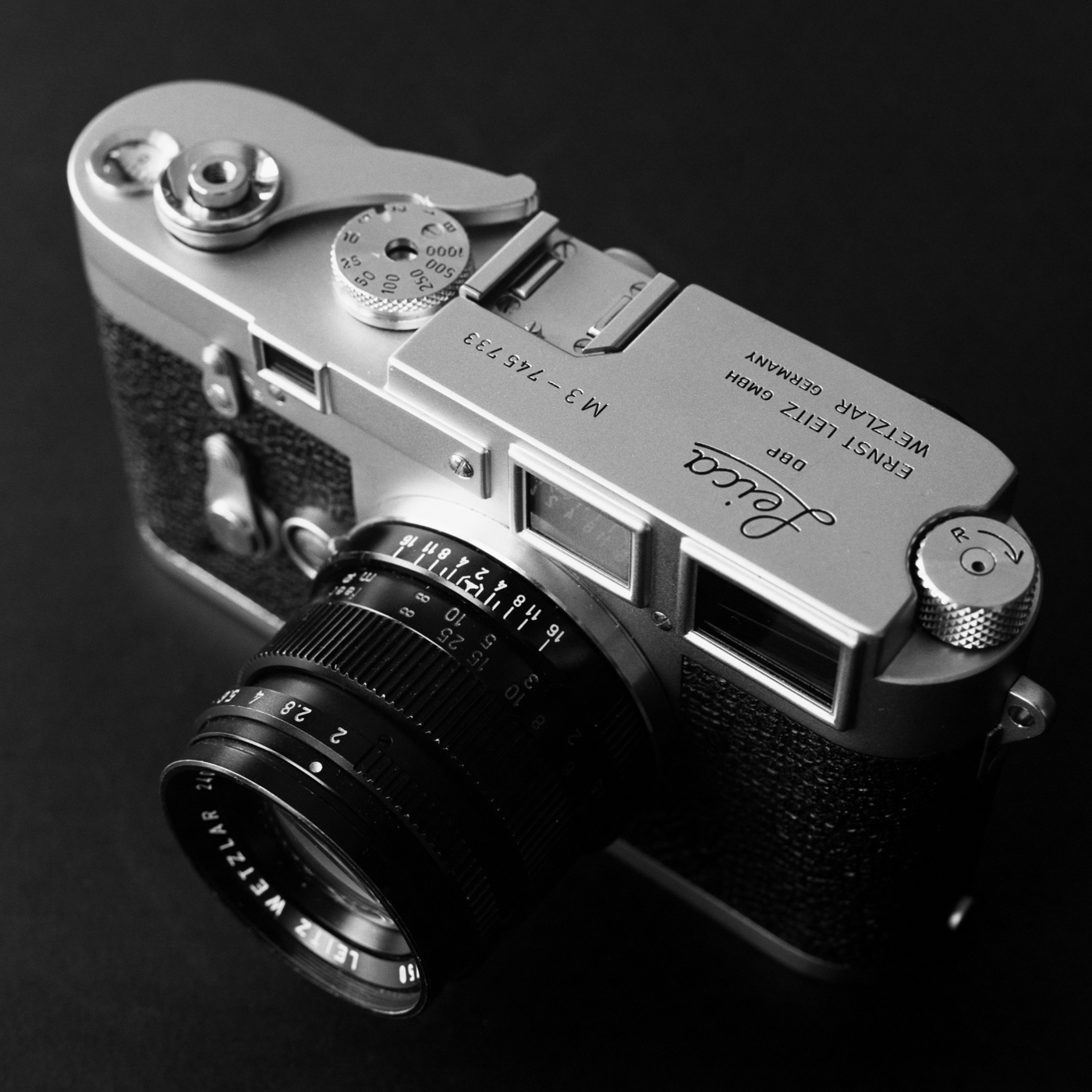 Yes, film photography has a nostalgic element for me. I grew up/learned photography on film, my dad was a film photographer and photographed our family on film only. And many of the famous photographs are made on film based (e.g. Cartier Bresson, Ansel Adams, Michael Kenna, Fan Ho, Saul Leiter) and most of those I listed are black and white only.  In addition, I love the look, feel and mechanical quality of vintage film cameras I use.  While it may seem this is an external reason to show off vintage camera in hipster fashion, this is not per se the case with me. I tend to be more reserved, and really do enjoy handling my cameras without anybody seeing me.

With the vintage gear, there comes also pluses and minuses as old gear needs to be maintained, can break, and may be difficult, expensive and/or impossible to fix. A big plus is that one can get very affordable 35mm camera lens setup, for example, from Nikon, for probably under $200 and now just need to buy some film to get started!

Slowing down and thinking about the story behind the image

There is no doubt that film photography does slow you down. First, you typically will not shoot film like digital as every shot counts. Film also forces you to slow down and as mentioned earlier makes you think: think about your composition / your story / lighting, whether you want to really take this shot and whether it is worth it to develop it. It basically makes you think more. Yes, sometimes you want to be spontaneous and you can be with film, too. But I love the fact that film forces you to slow down. It is not a major slow down, but enough to think about your subject, about the light, the composition and overall story.

I think with consistent use of film (e.g. film stock, lens, format), you can create more consistent multi-image story lines. The same can be said about digital, but it would require to use a consistent way of editing your images (which is of course also very doable). 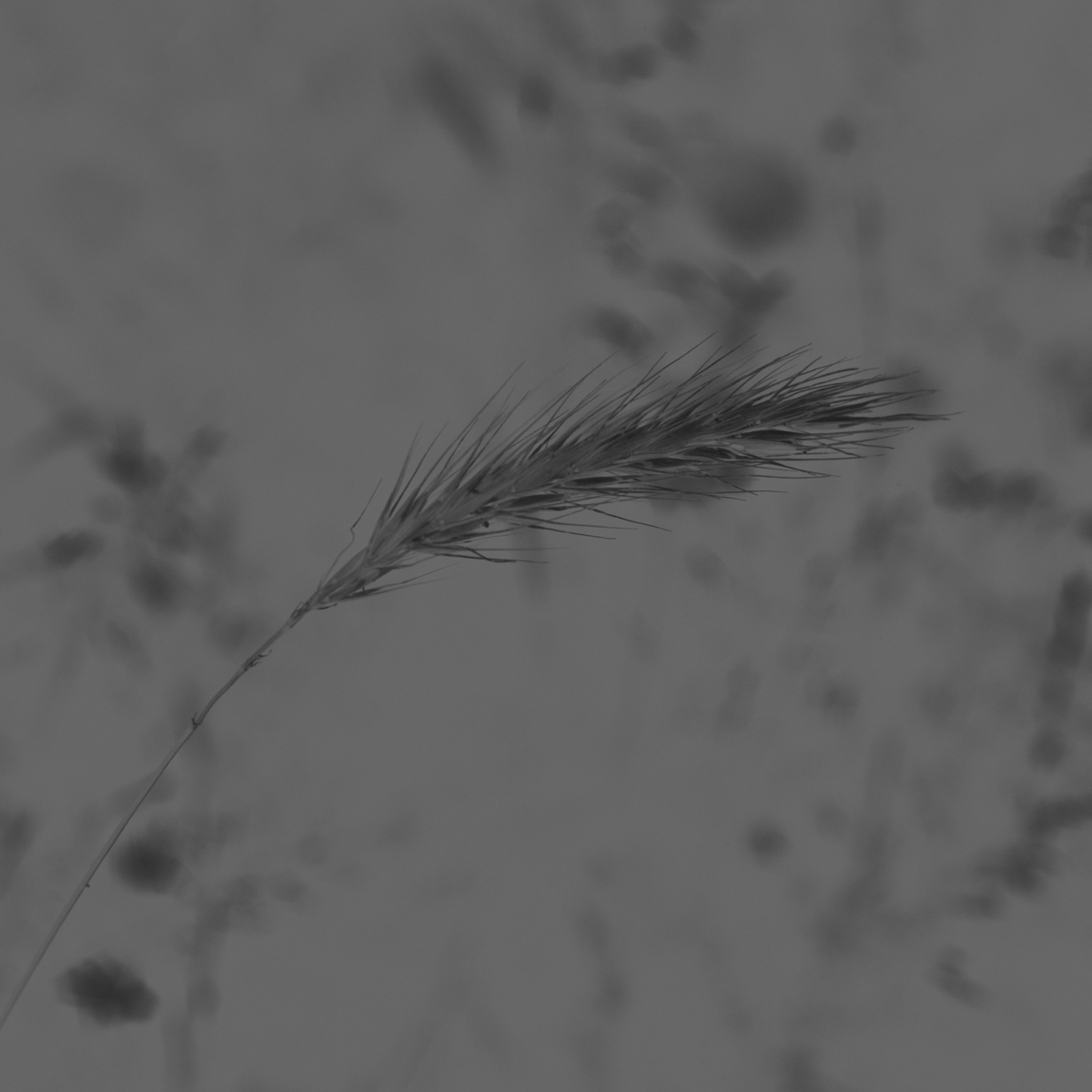 Negative of image below: this is Ilford FP4 120 medium format film

I personally love the development process. It is a continuation of the analog experience.  In particular developing black and white negatives is fun, and to me, almost a Zen-like experience. Yes, after a while, and after having developed many rolls of film, this is become less exciting and much of a routine.  But I still love the moment of looking at the negatives for the first time with great anticipation.

Storing negatives significantly adds to the analog experience. The negatives can be rescanned or re-printed in the darkroom anytime down the road if stored properly. And they can be stored easily for decades and beyond with proper precautions. My dad recently printed negatives from the 1950s and they look simply fantastic! Of course, digitized (scanned) negatives can be stored and backed up digitally, providing additional backup for those requiring redundancy.

It is relatively easy to loose and delete digital files. While some might argue that one should use always use a triple storage backup strategy, many of us do not adhere to that. I accidentally deleted an entire series of digital images including several ones of my digital portfolio. An unfortunate accident that I think is less likely to happen with negatives (especially if they are also back-up digitally).

As mentioned previously, any gear choices are imposing limitations. Choosing film, and moreover choosing a specific film stock requires the photographer to limit herself. For example, I limit myself to black and white with a medium speed film. This limitations has implications as to the subject, the lighting conditions, depth of field and so forth. 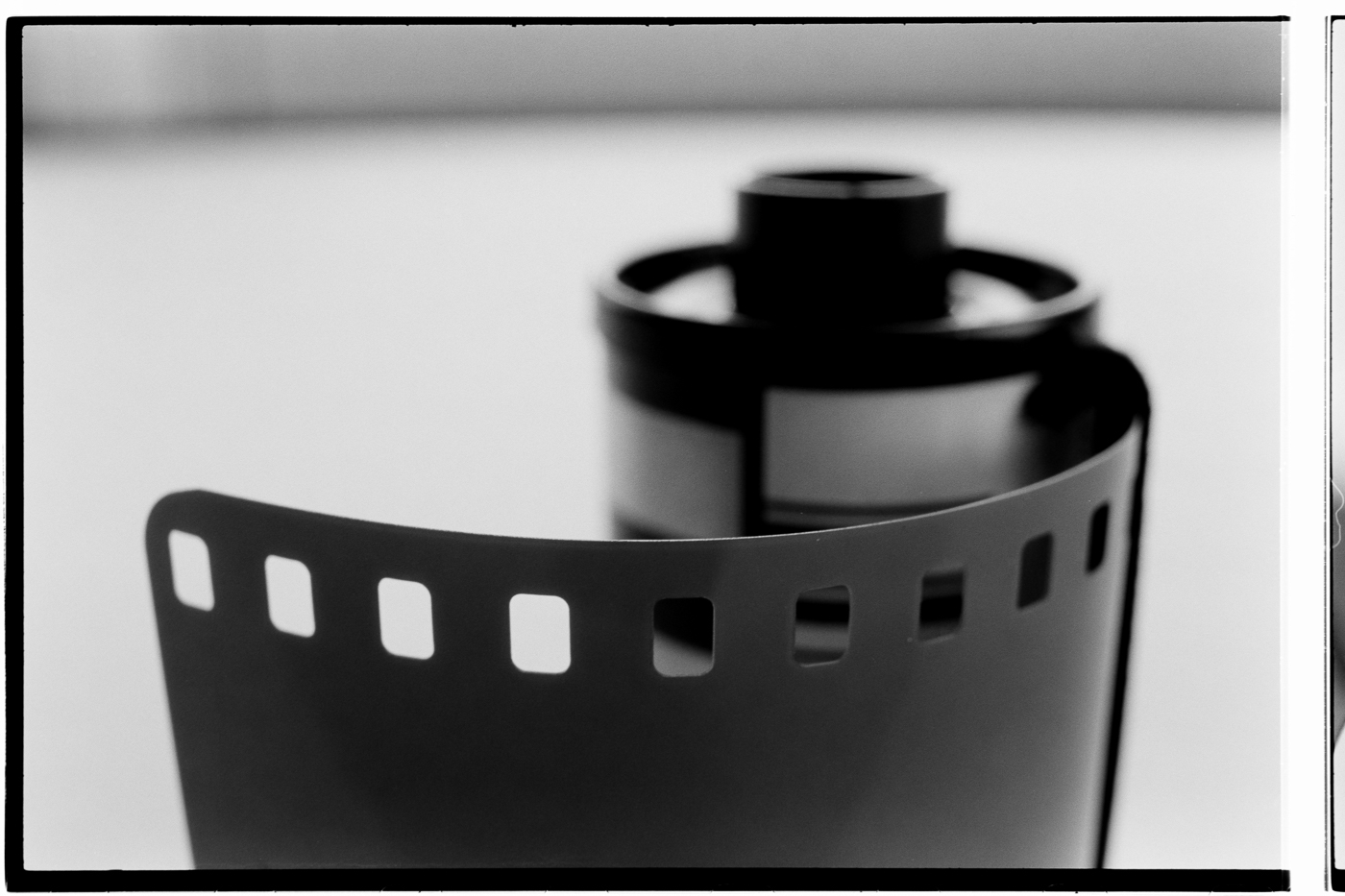 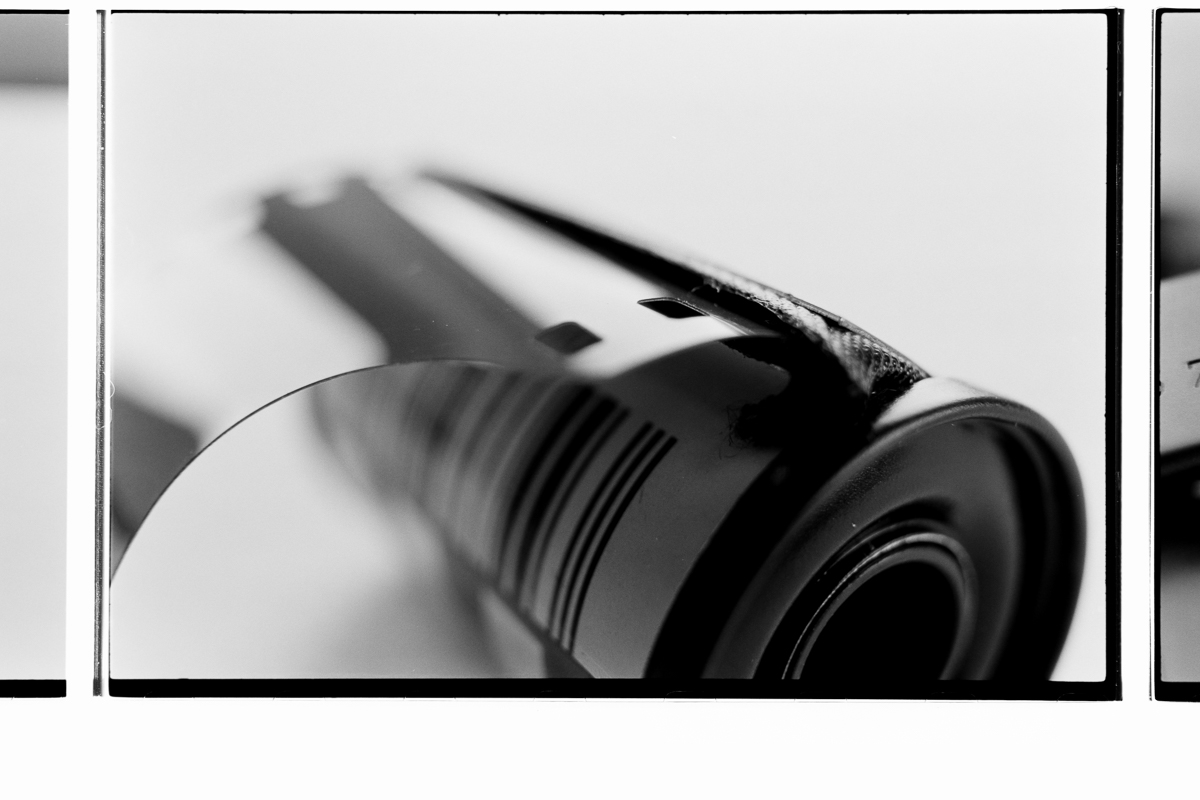 Film also creates some limitations in the “field”. Especially all manual cameras require the photographer to work slow and methodical, and with more deliberate thought of exposure setting in particular.  This process forces the photographer to think more than using a fully digital automatic camera. However, this does not mean, in any way, that one can not work lightning fast with film cameras.

A creative limitation can be paradoxically freeing and inspiring. And that’s what’s great about film.  It forces you to focus. With digital, it is very easy to overshoot and not think about exposure, composition, etc.

At the moment, I certainly enjoy the process of trying and experimenting with different film stocks, but this is largely the case as my recent journey into film (in 2020) only started in 2019. Having too many choices of film stock has often been agonizing for me.  My goal is to use only one black and white and possibly only one color film stock eventually.

Depending on development process, handling and even scanning (and rare pre-existing issues with film, in particular expired film), many different flaws can show up on the negatives (and ultimate positive scans/prints). Those range from dust, to scratches, scanning artifacts and other issues that can be more challenging to correct. However, I would argue once your process for developing, and further processing (dark room or digital scanning/conversion) is refined, optimized and streamlined, those are minor. Alternatively, sending negatives to a professional lab to develop and scan can minimize and/or eliminate those issues (of course depends very much on the lab).

Hipsters are often highlighting those negative flaws (like strong color abnormalities, light leaks or first of the roll partially exposed shots) … this can be argued to be just a hip trend to be get more likes on Instagram or it could be artistic genius. I tend to be in the first camp.

One of the things I love about film photography is that I take an image, but will not see the results immediately. In some paradoxic way, this is also tough for me, as I am more of an instant gratification person. Having said that, one of the most gratifying moments for me is to see the negatives for the first time, after I just developed them. And in my case, then to convert them digitally, although I do not enjoy that process as much, but love seeing the results.

It is commonly thought that with film, you expose for the shadows and with digital you expose for the highlights. Yes, with digital, one can recover a lot of shadow detail (not true with film), however, with film, it is very hard to overexpose and lose highlights, with digital, blown highlights are the worst, and it is relatively easy to do and once they are blown, you are done. Film is quite forgiving, especially negative film and black and white perhaps even more so. This is not a major reason, but again, I love how film treats highlights and also transitions versus digital.

There is undoubtedly an aesthetic (look) to film. Film renders highlights (and tonal and also color transitions) differently, there might be a certain “lack of sharpness”, there might be some grain, and a unique rendering of color (or grey) tonalities, contrast, and transitions. A lot of this depends not only on the camera system (in particular the lens), but also the film format, the film stock, the developer/developing technique, exposure, the scene itself, and the ultimate positive conversion (whether digital via scan or via print). Daniel Milnor states that a Hasselblad TriX film look can not be reproduced digitally. I tend to agree, although I am sure some photoshop wizard can get pretty close using digitally captured images.

The ultimate analog experience is either printing them yourself or having them printed by a printer.  Some of my favorite prints turn out to be my analog photographs. I have a few digital landscape shots I am also very fond of, but there is something special about those film negative prints that is not reproduced in digital.

Unfortunately, I do not have my own darkroom, so I do not print my own work “directly”. I convert my negatives digitally with a software called negative lab pro in Adobe Lightroom and then send them to a professional printing company. Some people refer to this process as a hybrid process as it involves a digital step. Purists would shy away from that, but for all practical purposes, sharing a digital copy is where many of my prints end up (e.g. website, social media).

Digital conversion of negative shown above.

Daniel is a Minneapolis Saint Paul based photographer, originally from Basel, Switzerland. Daniel loves the creative process, and recently started a photography podcast focusing on the art of photography.