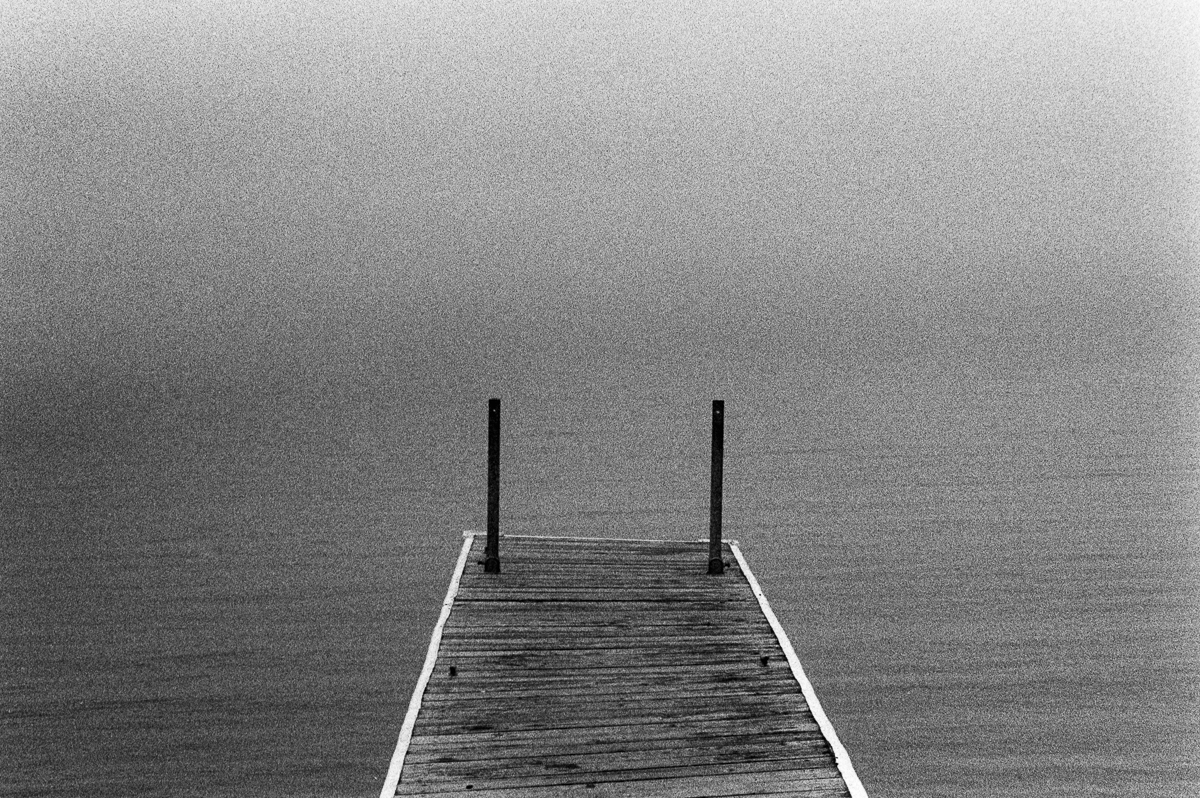 In photography composition is the way in which something (a photograph) is put together or arranged.  It is the combination of parts or elements that make up something. It is what we put in the frame and where we put it.

In other words, it is the design, arrangement, layout of (compositional) elements in a photography frame that make composition.

It is something that often makes or breaks an image. And it is very hard to do right.

How do you approach a subject for composition in photography?

Do you just take a picture and see how it looks later? Or do you have a vision? Do you see the image before you photograph it.  I do not think I have a formalized process, but I often use a combination of pre-visualization and experimentation. Let’s break this down a little further with some recent examples.

It was a foggy day at the lake. I decided to take some photographs with my film camera and some black and white film. So in a sense, I already knew that the subject involves fog and likely the lake / the shore.  I also was already locked in with regards to format (35mm) and color (in this case black and white) and focal length of the lens (90mm). So, before I even took a picture, I knew that those were my parameters (or limitations). I had a vision in mind of something minimalistic, where I could perhaps emphasize the fog (and the negative space it could create).

Photographic composition in the field

I did see and photograph quite a few subjects that interested me that morning and basically shot a full roll of 36 exposures. I experimented with different subjects. The one that I was probably most intrigued by was a small pier in the harbor. The fog was very dense, so that the pier and the lake seemed to get lost into nothingness.

Sometimes, I take only one image of a subject I like. This is one of the advantages of film, as I tend to not overshoot. Something that happens with digital all the time. While I did photograph a mini-series of the pier, each individual composition was photographed only once (so all the images below are actually all the images I photographed that morning of the pier).

This photograph sets up the scene. You can see that it is foggy. The tree line is barely visible. The strong grain adds to the feeling of haziness. I love the layers and how the visibility gradually diminishes from bottom to top of the image or close too far. The “lonely” crooked pier did catch my attention. The strong contrast of the white wood edging and the black poles further grabbed my attention.

One could argue, one of the things that this particular image lacks is balance: maybe I should have placed the pier on the right of the frame, and balance this with the treeline in the background. However, since there is a small leading line on the bottom left corner of the image (tire tracks), and the pier is facing from left to right, this composition probably still works. 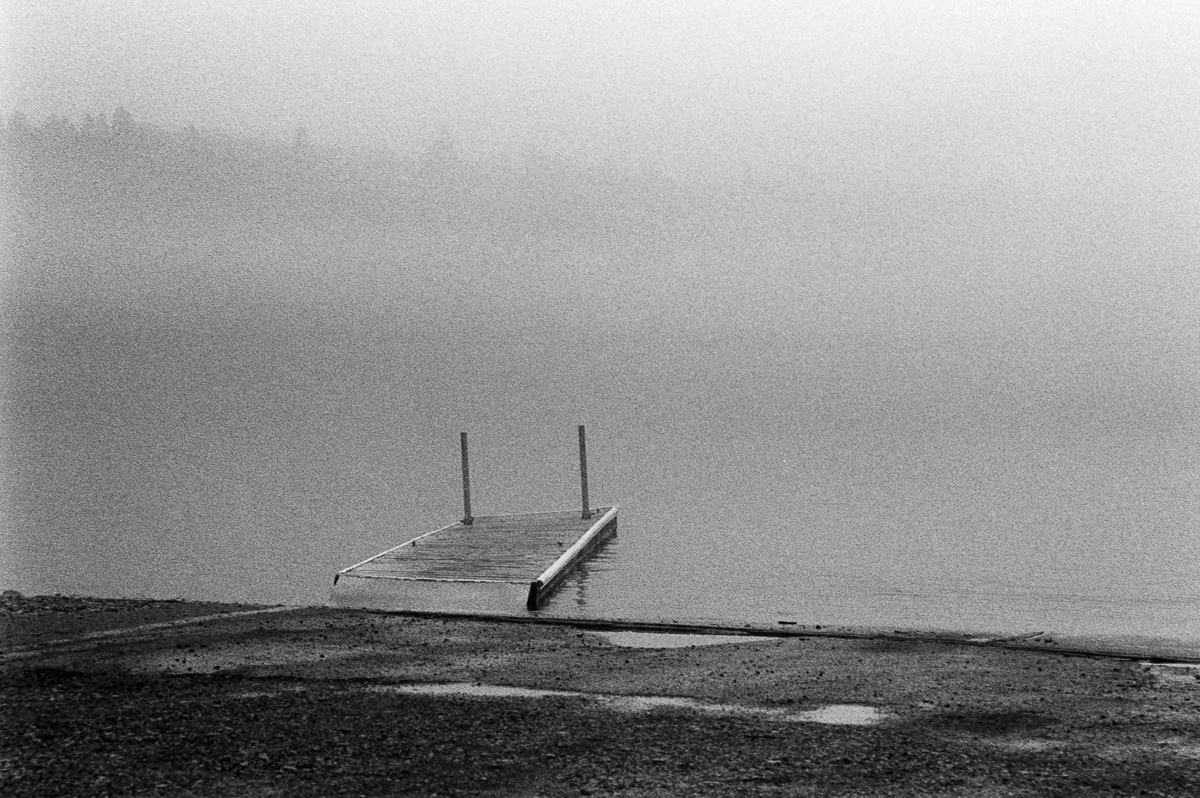 Here another perspective, still an overview shot (of the pier). What drew me to this one were the leading lines created by a truck. This one has significantly more negative space. The tree lines are no longer visible. And again lots of grain. I personally like that look quite a bit. I printed those images out, and love the way they look in print. 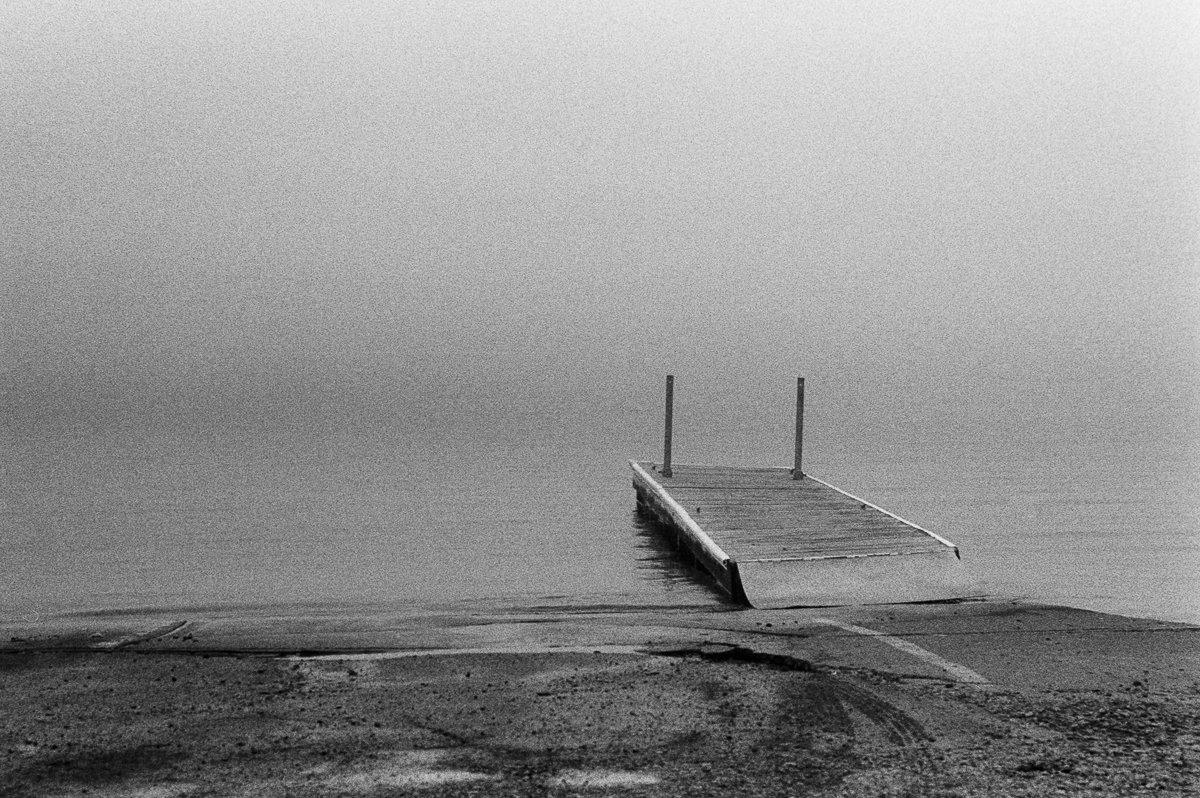 This is a close up of the pier. As you may have seen in overview shot, the pier was crooked, so it was not possible for me to create a perfect symmetry of lines (the ones going left to right and the pier itself with its two pillars).

So, the symmetry lines on the pier are not perfectly horizontal, but the image is reasonably balanced. Also, the pier is placed in the middle of the frame, and not according to the “rule of thirds”. Something I will discuss in another post soon.

Note that this photograph has a lot of negative space. The white lines draw the eye in and then the eyes eventually end of up grainy “nothingness”.

4th example of series: another perspective of a closer view 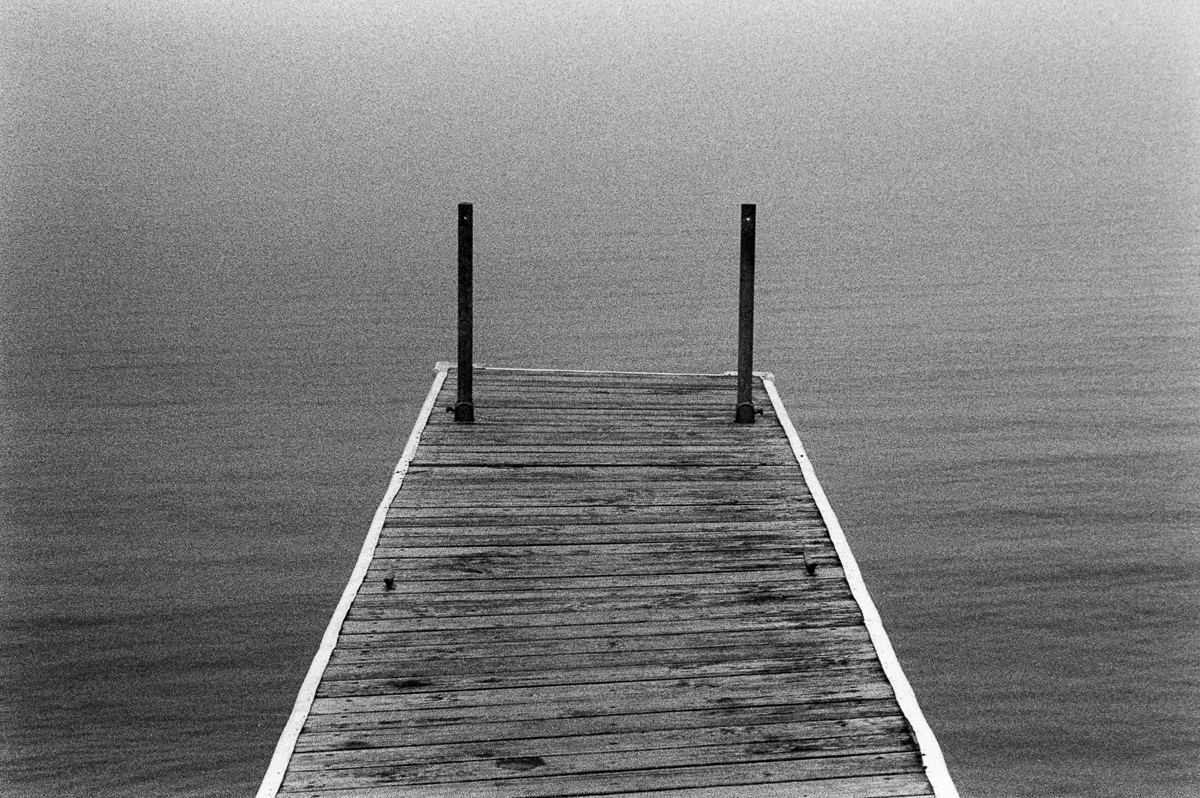 This example is a very similar composition as example 3 above, but this time the subject dominates the frame more. Fill the frame is what many would say is another “aesthetic” rule, but I would argue: not necessarily! In fact one can work with negative space very effectively and to me personally, example 3 is more effective than example 4 or 5.  But this is also very subjective.

Example 5 of series: another perspective of a closer view

Again a variant of example 3 and 4. This time, I used the portrait orientation of the camera. Note how this creates a different feeling of the image. I also came even closer to the subject (the pier) this time. 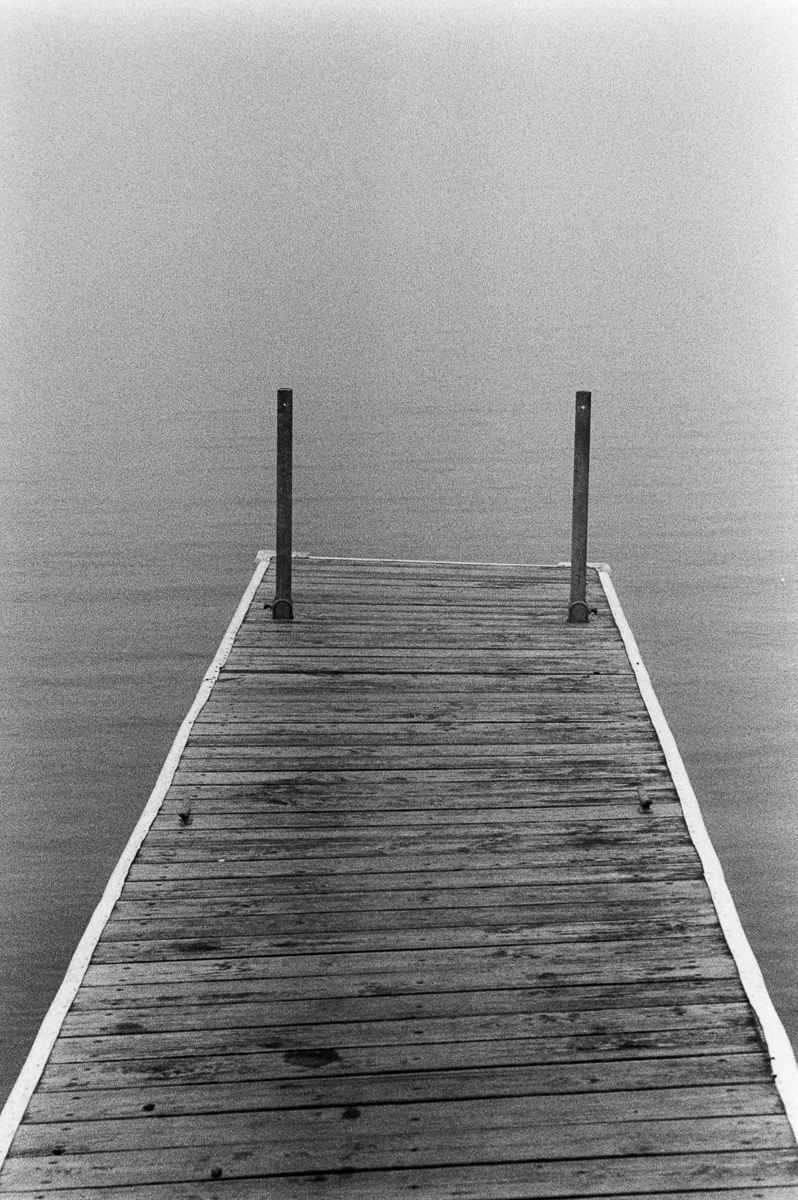 Photography is a challenging art form. On the one hand, photography is available to literally anybody who can hold a mobile phone, but so is painting. On the other hand, only a very few really ever master it.  (BTW: I am not implying I do). To really master the art of photography, a solid technical and aesthetic aptitude are quintessential. One interesting aspect of photography is how to approach a subject. To me this does not just mean where to point the camera, but involves a process of pre-planning/pre-visualization, experimentation in the field to design a frame and create a moment/story that just works.  There might be additional work during post processing and printing, but generally, to me this is minor in film photography. My goal is to get as close to the final product “in camera”. The images here are just one example of how I approach a simple subject.  Other photography genres may require slightly different approaches.  But I would say it’s not terribly different in the studio or even for street photography, at least for me.  Sometimes more pre-planning goes into photographs, sometimes less, sometimes none.

With regards to composition, this series may show some interesting aspects of composition: where to place the subject, the use of negative space, and other aspects. None of these photographs are perfect, not even close: they are handheld, with a 35mm film camera, home developed, and have some imperfections. But all this together creates a mood / emotion that reminds me of that morning on the lake.